» Things to do » Beaches

Several of the most important beaches on Lewis lie withing a short ride from the hotel.  The Doune Braes is ideally situated to take advantage of beaches to the north and south.   The closest being the two beaches to the north of the hotel, Dalmor and Dalbeag.  Mor means big and Beag means small in Gaelic, and is the distinction between the two.  Dalbeag Beach is to the North of Dalmor.  Both beaches have access by road, although Dalmor has much better parking and toilets.  Both beaches are also exposed to the westerly winds and swell and because of this are commonly used by experienced surfers, particularly Dalmor.

Bostadh Beach lies at the top north west corner of Great Bernera. Great Bernera is accessed nowadays across a bridge and the route is down the B8059.  An added attraction to the beach is the restored Iron age Mill which lies at the head of the beach. The building emerged from the sands after a storm.

lies on the West of Lewis and is found by driving towards Uig on the B8011 and turning right at the end of Loch Roag. A single track road leads you past the white Uig Parish Church to a junction.   The road is a large loop that ends up back at the church passing both beaches. Valtos has two main beach areas, both of which are quite magnificent.  The larger of the two beaches on the north is a  mile long arc of white shell sand and has water and toilets.

lies on the south western side of the Isle of Lewis and is one of the largest beach areas. The beach has places to camp and also has a toilet block.  Uig beach was where the discovery of a Viking Chess set in a small stone chamber at the edge of the Beach. Inside were 93 Chess pieces made of Morse Ivory, from the husks of Walrus teeth. The pieces were probably crafted in Trondheim Norway. 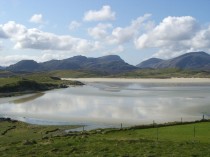